“Apparently, it wasn’t a long-thought-out gesture, either.”

–  the reaction to Duff Goldman, the Ace of Cakes, proposal to his girlfriend with a piece of butcher’s twine. Our reaction: chivalry is not dead! #truelove

Harold and Kumar’s favorite place just got a new burger. Last month, White Castle added The Impossible Burger to a 140 of stores. Deemed the veggie burger for meat lovers, the California start up can now be found in a few chains, including TGI Friday’s. So, what makes this news so big? A full-size impossible burger runs about $16, so $1.99 for a slider is a huge bargain. Sounds square to us!

When it comes to modern conveniences, one of our favorites is Grubhub. There’s nothing like scrolling through your phone and ordering food from your bed, am I right? Well, now your favorite food app takes Venmo. The new integration, not only, makes it easier use your Fantasy Football earnings to indulge but, also, let’s you split the bill. Win win. 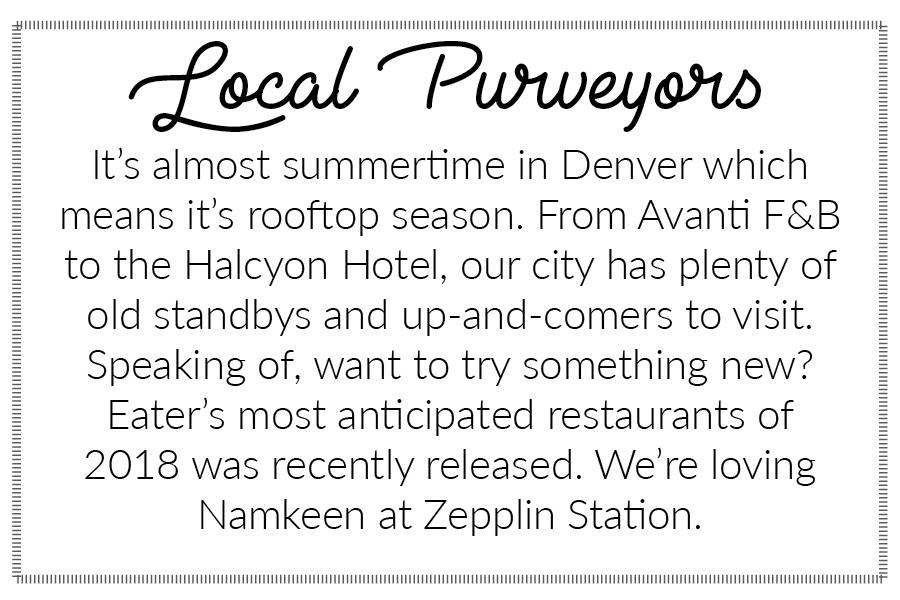 If you believe in the philosophy, “rosé all day” you’re in luck. Our favorite Amazon-owned grocery store will be featuring a rosé promotion through the month of May. Specially selected by Whole Foods’ Master Sommelier Devon , the sale features 12 wines priced from $9.99 to $39.99 which includes two magnum bottles. If you’re heard our Portugal post, you’ll be pleased to hear that one of our favorite varietals – Vinho Verde – is included in the list. So, it looks like we’ll be taking a break from rosé cider and seltzer and going back to basics.

When it comes to building hotels, it’s all about location, location, location. Well, that’s exactly what Orion Span had in mind. Their latest venture is out of this world and definitely a first of the industry. Projected to be open in 2022, here are the details on Aurora Station, the first luxury space hotel.

What goes up must come down. With all the hype related to space travel, another hotel project may have gotten washed out. Located 16.4 feet under the Indian Ocean, the first underwater hotel residence is being built in the Maldives. The Muraka, which translates to coral in Dhivehi, is a two-story hotel villa that will feature a gym, infinite pool, bar, and butler’s quarters along with a bathroom and bedroom on the underground level. Boasting the best of both worlds, the second level provides guests with breathtaking views of sunsets over the ocean. The villa will be available at the Conrad Maldives Rangali Island in November.

The wait is over. Marriott and Starwood have officially combined their rewards programs. The integrated program allows loyalists to keep their status and accrue new points at a higher rate. Compared to its competitors, Marriott has one of the largest rewards programs in the biz with more than 110 million members. The powerhouse duo will implement these changes in August.

Bummed that you never got to travel on the Queen Elizabeth 2? Then, you better book a trip to Dubai. The famed luxury vessel has been officially docked and the QE2 will now serve as a 600-800 room hotel. Built in 1969, the ship racked up more than 6 million miles in its 800 voyages back and forth across the Atlantic; it even served the British troops during the Falklands War in the ’80s. A $100 million project, rooms will cost visitors $150 to $15,000per night and is hoping to open its doors by October.

If you love food and wine, you have new country to put on your list: Georgia. With a Mediterranean climate, you’ll love the fresh produce and endless meat, poultry, and fish. Signature dishes include Khachapuri – a bread filled with eggs and cheese – and Kinkali – a dumpling filled with spiced meats or a potato and mushroom mixture. But, that’s only the tip of the iceberg. Georgia is one of the oldest winemaking cultures in the world. Although you may not have heard of the varietals, you’ll love the family-owned vineyards. Plus, many of these vineyards practice organic farming.